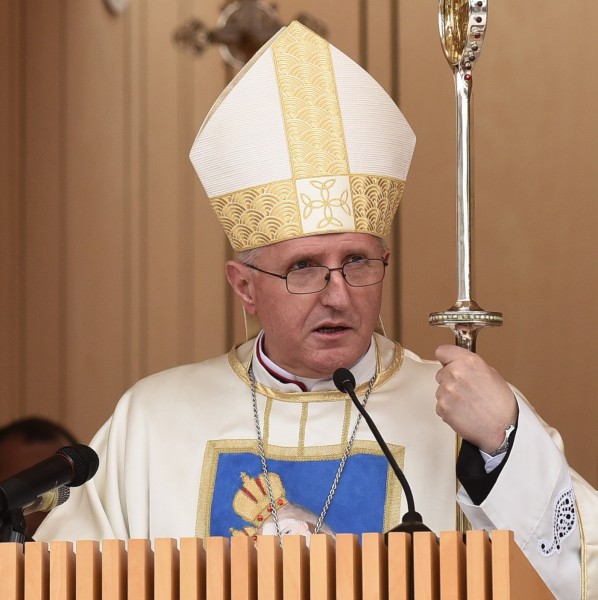 We are celebrating the Feast of the Assumption of Mary. I hope we have made this pilgrimage with a strong faith in life after death, that the expectation of the resurrection of the dead and life of the world to come is not just a creed form to be recited on Sundays and holidays, but that we experience our lives as open to eternal life with God. Our life is not limited to conception and death but is endowed with a beautiful future that God gives to all who love him.

Why is this so important? Because today's holiday is meaningful and fulfilled only in our faith in eternal life. Without that faith, this holiday would be empty. It would be an illusion, a mirage—an empty prospect, a fraudulent promise that finally disintegrates into disappointment. But our God is not deceitful. He does not make empty promises because He is love. He, therefore, gives us himself so that we can live in him both in time and in eternity. Fulfilling his promises is also the content of today's holiday. In the main Mass prayer, we heard, "Almighty and Eternal God, you raised the body and soul of Immaculate Virgin Mary, the mother of your Son, into the glory of heaven." These two lines are a summary of the dogma of Assumption of Mary, as after the consultation with bishops from all around the world was solemnly proclaimed on November 1, 1950, by Pope Pius XII, "Hence the revered Mother of God, from all eternity joined in a hidden way with Jesus Christ in one and the same decree of predestination, immaculate in her conception, a most perfect virgin in her divine motherhood, the noble associate of the divine Redeemer who has won a complete triumph over sin and its consequences, finally obtained, as the supreme culmination of her privileges, that she should be preserved free from the corruption of the tomb and that, like her own Son, having overcome death, she might be taken up body and soul to the glory of heaven where, as Queen, she sits in splendor at the right hand of her Son, the immortal King of the Ages."

However, our faith in the Assumption of Mary is much older than the proclaimed religious dogma. This feast was first celebrated in the Church of Jerusalem soon after the Council of Ephesus in 431 AD and is, therefore, one of the oldest feasts of Mary. It is also evidenced by the many churches dedicated to the Assumption of Mary and are older than the proclamation of religious dogma. Veliki šmaren, as we also call the Assumption of Mary, is at the same time one of those holidays that invites Slovenian Christians to pilgrimages. Today, large shrines, including the Slovenian National Shrine of Mary in Brezje, and small shrines of Mary, which are deeply inscribed in the faith and love of the people, are full of pilgrims who come to the Mother for consolation and encouragement. At the same time, a pilgrimage strengthens our faith in life that does not end in soil or ashes. Still, it takes on different dimensions over the threshold of time, for, as the Apostle Paul says, "What no one ever saw or heard, what no one ever thought could happen, is the very thing God prepared for those who love him. But  it was to us that God made known his secret by means of his Spirit" (1 Cor 2: 9-10).

The word of God motivates us today with two meaningful scenes. First of all, the image of a woman "whose dress was the sun, and who had the moon under her feet and a crown of twelve stars on her head" (Rev 12: 1). The woman carries life as she is pregnant and screams from labour pains and torments. The scene fills us with admiration and awakens hope in us. In this beauty and life force, a desire awakens in us to join Mary and sing with her the hymn we heard in the Gospel: "My soul magnifies the Lord and my spirit rejoices in God, my Saviour." Our hearts are also filled with joy and gratitude because God proves his love for people in such unimaginable ways.

However, the shadow of a huge red dragon enters this magnificent scene. This dragon is a destroyer. He drew a third of the celestial stars with him. It watches over the child the woman will give birth to because it wants to devour him. Eventually, the dragon began to chase the woman, who found refuge in the desert. Thus, before us is a shocking contrast: a woman who has been taken to God gives birth, gives life, a dragon that has fallen to the ground and separated from God, devours, causes death.

Everything was already foretold in the book of Genesis, where God promised a saviour after the apostasy of our ancestors, when he announced to the dragon, the old serpent, "I will make you and the woman hate each other; her offspring and yours will always be enemies. Her offspring will crush your head, and you will bite her offspring's heel" (Gen 3:15). The dragon was defeated in Jesus' death and resurrection, acts of his unconditional love, however, the dragon acted and acts out of incomprehensible hatred.

Jesus' Resurrection and Ascension prevented the dragon from harming Jesus and those reborn in his death and resurrection in any way. Because of her fidelity in service with soul and body, Mary certainly takes the first place and was joined to the Son Jesus in heavenly glory.

Therefore, the dragon that was thrown to the earth directed all its energies to action against the Church of Christ in its beginnings and throughout its history. Even in our time, the Church is not spared opposition and attempts to snatch away everything it gives life in this world through her actions.

However, today the dragon is different. It is no longer red because everyone would recognize it and can therefore protect themselves from it. Today, the dragon has adapted the way it appears. It appears to us in very different colours and tries to convince us that it is benevolent with its colourfulness. It likes to be seen as harmless for people to let it close.

Having a different appearance, he also changed the way it works. It used to destroy, torture, send into exile, kill. His actions were visible, violent. It could be easily identified.

Today, however, it uses a different tactic: it no longer imprisons or sends to camps but wants to take possession of the human interior; it wants to kidnap his soul, empty him of all values, and deprive him of all the supports by which he could grow into independence. It makes great efforts to force a certain way of thinking on him, to convince him of the redemptive nature of certain notions, by labelling all that is inconsistent with the dragon's mode of action as backwardness, intolerance, and hate speech. It also works by depriving all those who object to it of the opportunity to speak and shutting them up in forced silence.

Therefore, we must try to live the scene very consciously by the evangelist Luke in the passage about Mary's visit to Elizabeth, telling us about the encounter. The unshakable joy addresses us that both women show to each other. Although they have different places and roles in the history of salvation and will each mark the future of humanity in their way, there is no shadow between them; among them is openness, acceptance, and great mutual respect.

It is a great need of our nation at the moment, especially among those most responsible for our common affairs. When faced with difference, each individual, each group, and each community has a choice: will they see difference as a threat to themselves and try to destroy it, or will they see it as an invitation to dialogue and an opportunity for complementarity that can bring something good, something better to make the encounter possible.

The Feast of the Assumption of Mary opens us to a vision of the future as God prepares it for those who love him. This future is wonderful. At the same time, we know that this future begins here, in our daily decisions for good or against it, for God or against him. May Mary help us to be able, like her, to bring life, joy and at the same time respect to people, and in this way to show honour to Him, who also did great things for us. That is why we will now give ourselves, our nation, our compatriots around the world, and especially our families and our youth to Mary to rediscover and create a space of joy, encounter, and mutual respect.

Metropolitan Archbishop of Ljubljana and

President of the Slovenian Bishops' Conference